A major food producer with multiple locations was looking to expand operations organically. An opportunity arose within an older, “weathered” steam plant, however, the building’s footprint was locked due to previous expansions. The production facility had also recently experienced a significant event with one of the existing fire tube boilers that resulted in a call-to-action.

The food producer determined there were four major decisions to make about the opportunity associated with this plant. They asked how they could: 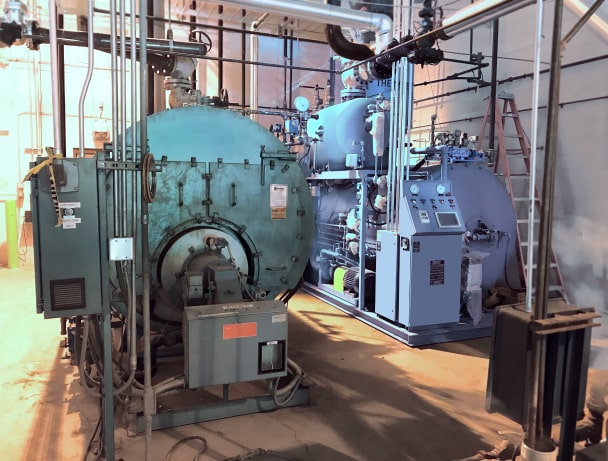 Thermogenics was already responsible for maintaining the operational integrity of many of the food plant producer’s other facilities. Thermogenics suggested purchasing and installing its Thermocoil boilers which provided several benefits including high-capacity and a lower footprint to address their operational constraints and avoid physical plant expansion costs.

THE FIVE MAJOR BENEFITS TO THE CUSTOMER WERE:

1. Space Savings: Thermocoil boilers take up less than half the space of traditional fire tube boilers, avoiding expensive and time-consuming renovations. The plant was then able to achieve more than double the volume of steam generation by replacing the existing 150bhp, 3-pass fire tube boiler with a 500bhp Thermocoil boiler and Therm-o-pac Deaerator, while retaining the same footprint, taking clearances into consideration.

3. Cost Savings: Thermogenics was able to provide more than double the capacity within the same area thereby increasing the value of btu/hr per-square-foot of steam plant space. In addition to the price-per square-foot savings, the standard Thermocoil boiler increased efficiency to 82%. The client further invested in a flue gas economizer for feedwater pre-heat, bringing the total boiler package to greater than 85% efficiency. Moreover, the new-found real estate in the steam plant allowed for the investment in a Deaerator which resulted in a reduction in water chemistry costs.

4. Improved Safety: Safety was always a top priority and a key area of focus for the project. The customer’s concerns regarding a waterside event were addressed by the Thermocoil’s forced circulation water tube design, maximizing safety in the plant.

5. Expectations Surpassed: The food processor ultimately selected Thermogenics for the job due to its field service team’s outstanding work and ability to train plant personnel on how to effectively operate Thermocoil boilers. Thermogenics’ customers aren’t just taught how to run new Thermogenics boilers; they can rely on Thermogenics’ field service experts for quick and effective maintenance and repair to ensure maximum plant uptime.

The multi-faceted solution that Thermogenics had provided, allowed the food plant customer to continue operating with improved safety while doubling the plant’s capacity. Below are highlights of the results delivered by Thermogenics:

To learn more about the Thermogenics boiler advantage, please contact us at: info@thermogencisboilers.com